Beyond the Box: Boise State 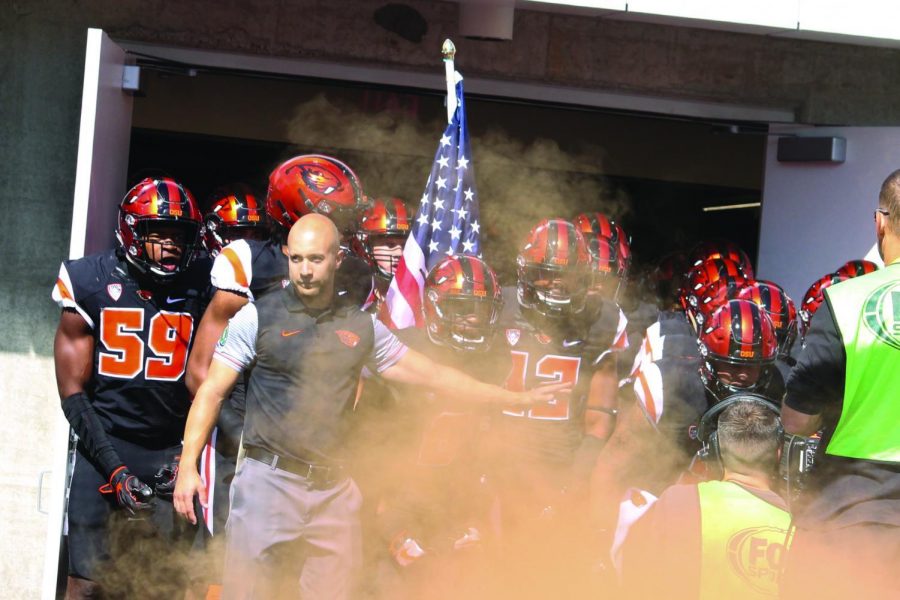 The Oregon State football team (1-2) lost 38-24 to Boise State on Saturday, ending a four-year streak of winning nonconference seasons. Head coach Gary Andersen lost his first nonconference home game in his tenure at OSU as well. Here are the statistics from the first three games that may not appear in the average box score.

True freshman walk-on quarterback Conor Blount played the entire second half of Saturday’s contest after junior Darrell Garretson was pulled due to injury concerns. Both quarterbacks completed 11 passes, but Blount’s went for 138 yards and Garretson’s for just 53 yards. All four of OSU’s passes that covered more than 15 yards were thrown by Blount.

Saturday’s 42,846 fans were the most in Reser Stadium since Andersen took over as head coach last season.

OSU has recorded exactly four passing plays in each game this season that went for 15 or more yards. Sophomore wide receiver Seth Collins was the recipient of four of them.

Victor Bolden’s 272 all-purpose against Boise State, including a 99-yard kick return touchdown, was the fifth most in a single game in OSU history. He owns the single-game record already with 327 yards in the 2013 Washington game, when he also had a kick return touchdown.

Bolden had 29 punt return yards Saturday and most importantly no fumbles; through two games, OSU had returned seven punts for negative nine yards with two fumbles. Last year, Bolden became the first OSU player ever to have a kick and punt return touchdown in the same season.

Junior wide receiver Jordan Villamin has been targeted 17 times by OSU quarterbacks this season, but has just seven catches for 44 yards and no touchdowns.

Boise State regularly had ballcarriers get into the secondary and wide receivers catching passes downfield, as evidenced by the 37 combined tackles that the four Oregon State starting defensive backs had on Saturday. All OSU linebackers had 18 tackles combined and defensive linemen had 14.

So far this season, the Beavers’ wide receiving corp has only one touchdown reception: Bolden’s 30-yarder against Minnesota.

Sophomore running back Ryan Nall has carried the ball 15 times for 102 yards in first quarters this season. In all other quarters combined, he has 18 attempts for 47 yards.

Coming into the Boise State game, Nall was averaging 2.5 yards per carry on first-and-10 situations. On Saturday, he had two carries on first-and-10 plays and totaled 22 yards, including a 14-yard touchdown.

OSU has failed in a fourth-and-one situation in each game this season and OSU is 0-for-4 overall on fourth down attempts.

OSU forced two turnovers to Boise State’s one, but lost the points off turnover battle, 7-0. OSU didn’t have any interceptions; Treston Decoud had two last week to snap a 22-game streak without an OSU cornerback recording an interception.

OSU never led against Boise State; the Broncos have yet to trail at any point this season.