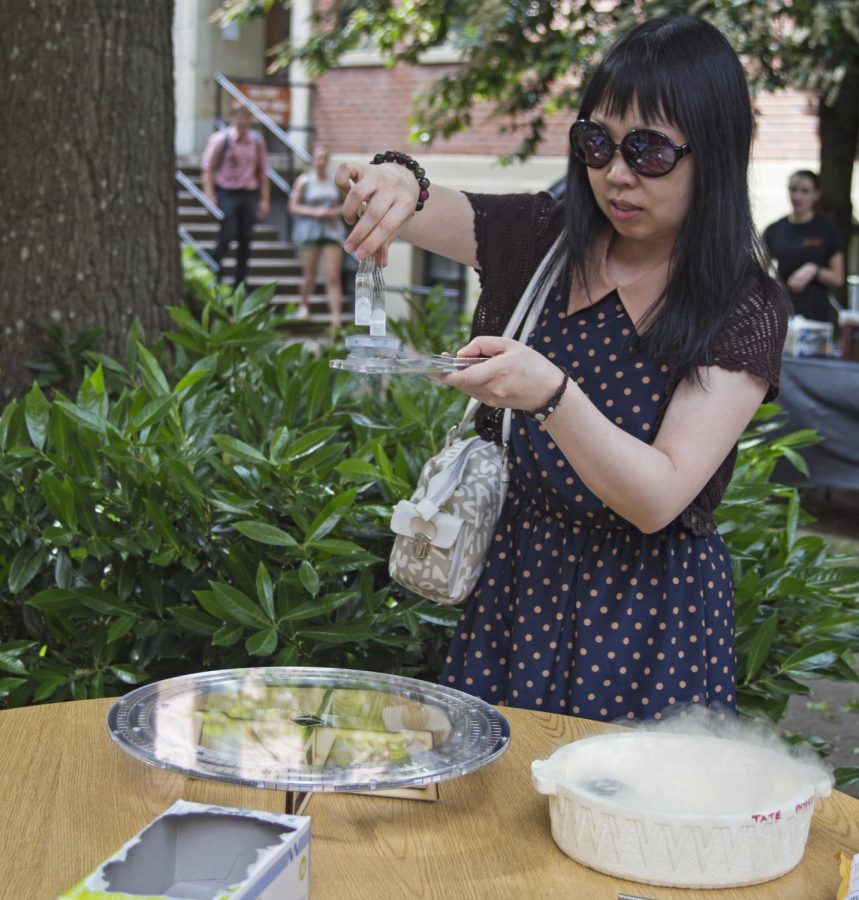 Most people wouldn’t assume bananas could be radioactive. They might be in for a sweet surprise.

McCaleb was one of many demonstrators at the Chemistry is Awesome event near Gilbert Hall, which had more than 100 students, staff, faculty and community members show up to partake in chemistry-related activities. Topics covered in the demos included everything from radioactivity of common household items to the more complex properties of periodic elements.

In McCaleb’s demo, participants determined if the banana was more radioactive than a lantern mantle.

The wager? A Chipotle gift card.

“Between the two, which one do you think is more radioactive?” McCaleb asked participants.

The overall event featured a dunk tank, on-hand chemistry department staff and faculty and music from The Svens.

“This is a great turnout, compared to last year also, this is very good,” Pantula said. “Not only (does it show that) chemistry has a lot of impact, but that it’s awesome and fun.”

The event helps to highlight the importance of chemistry in maintaining a healthy society, economy and planet while also appealing to young crowds, Pantula added.

“For all of that, science and chemistry are very, very important,” he said.

Mas Subramanian, a professor from the department of chemistry, contributed with a display titled “Living in a Materials World: Superconductors and Inorganic Pigments.”

With the assistance of Jun Li and Gabriella Giampaoli, the demo showed how the materials helped devices such as MRI scanners and “floating” Maglev trains in countries such as Japan

“That property is very unique,” he said. “In this case, it’s not a magnet. It’s a superconductor.

Part of the demonstration featured chilled materials that appeared to float on a metal-and-glass saucer on the table.

Li, who works as a research associate in the department of chemistry, said that very cool temperatures of around -92 degrees Kelvin kept the materials moving in a circular motion.

Noah Cochran, a senior in chemical engineering, was among many students who attended the Wednesday night festivities.

Cochran, though no stranger to chemistry, said this was his first time attending the Gibert courtyard event.

Cochran was among many others who tried his hand at the banana vs. lantern activity.

“I know bananas are pretty radioactive,” he said. “I don’t know anything about the lantern mantle, so we’ll find out.

Additional information on the department of chemistry and future events can be found on their website at chemistry.oregonstate.edu.