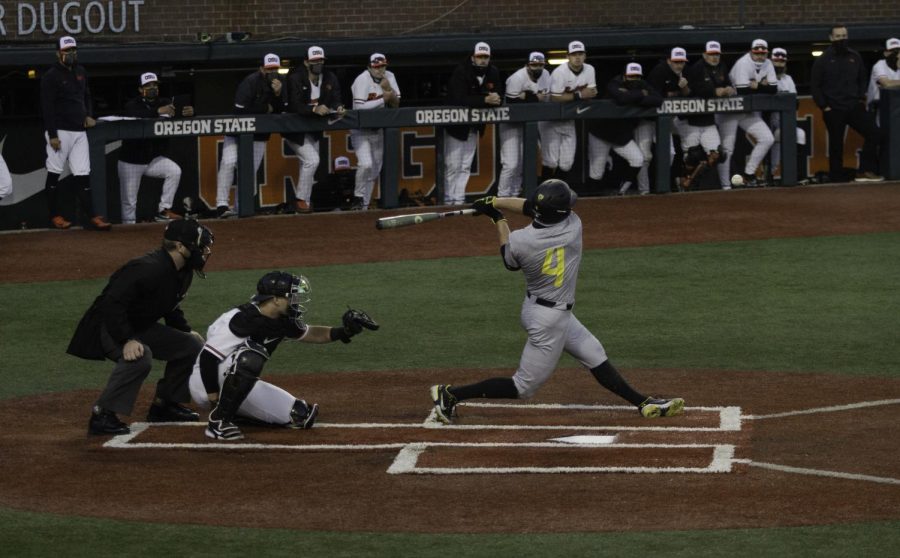 UofO freshman Josh Kasevich misses a pitch during the first game of OSU vs UofO’s triple header game on March 12th 2021. Although last year was a shorter than normal season due to COVID, Josh Kasevich Played in all 14 games starting nine of the 14 at third base.

The Oregon Ducks snapped the Beavers’ ten-game winning streak with a 7-0 shutout for the series opener on Friday night, March 12.

The Ducks landed themselves on the scoreboard with an RBI single in the second inning, followed by a base clearing three-run triple hit by left fielder Tanner Smith to take an early lead at 4-0. This was then followed by a solo home run to right-center in the fifth by Kenyan Yovan and a pair of runs in the sixth to increase the lead to 7-0, Oregon.

The Beavers were unable to get the bats going in their PAC-12 opener, accumulating four hits throughout the game. Senior shortstop Andy Armstrong led the team with two hits on three at-bats, boosting his batting average to team-leading .444 on the season.

Oregon State will look to regroup on Saturday, March 13, at 1:35 p.m. for the second game of the series against the Oregon Ducks.