The Daily Barometer • May 27, 2016 • https://dailybaro.orangemedianetwork.com/9884/daily-barometer-news/rocking-in-the-rose-city/

Rocking in the Rose City 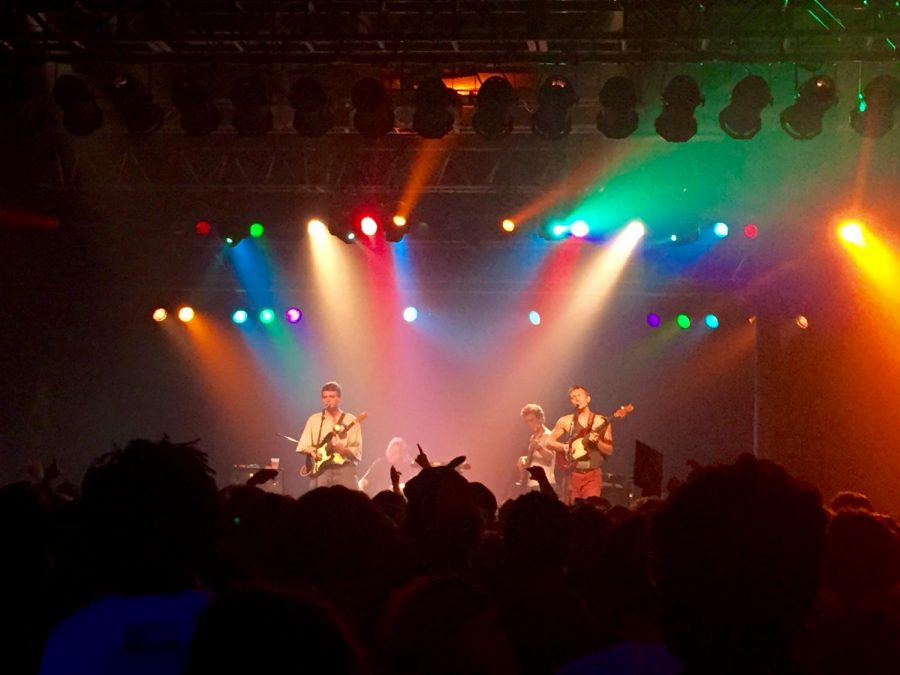 Canada’s own Mac DeMarco, famous for songs “Salad Days” and “Another One”, performed at the Roseland Theater in Portland last night before heading to Sasquatch Music Festival in the Gorge.

This was his second consecutive show in Portland, both selling out according to the Tickets West website. DeMarco has been touring around the world with his bandmates since December.

Though it was largely a young audience, the 21 plus balconies were filled to the brim with excited fans ready to catch a glimpse of the eccentric musician. As the lights in the venue began to dim, the crowd squeezed against the stage in anticipation. Concert-goers cheered on the sound man multiple times while setting up the stage before the main act exploded onto the stage with the song “The Way You’d Love Her”.

“I had a lot of drinks last night,” DeMarco admitted to the crowd, but it wasn’t enough to stop him and his band from having a wildly entertaining show. His quirky 90’s-esque style compliments Portland’s weirdness in ways few other bands can.

Rowdiness was encouraged and welcomed as crowd surfers made their rounds through the pit. At one point during the concert, DeMarco himself jumped into the cluster of adoring fans and was pulled up onto the balcony while the horrified security staff watched.

Once fully regaining his balance, he continued to walk barefoot around the balcony’s edge to the opposite side of the venue until eventually diving back into the welcoming arms of the audience. After being delivered back to the stage, the band went right into the song “Still Together”.

In addition to playing their own hits, the band hyped up the crowd by covering Metallica’s “Enter Sandman”, Steely Dan’s “Reelin’ In The Years”, and Herman’s Hermits’ “Mrs. Brown You’ve Got A Lovely Daughter”.

After overwhelming cheers from the crowd for an encore, DeMarco danced back onto the stage wearing a white bra that was thrown at him earlier in the performance. Fans went berserk, rocking out and singing along with every word.

“We’ll be back to Portland, I promise!” DeMarco said before taking a bow.