The Daily Barometer • May 2, 2016 • https://dailybaro.orangemedianetwork.com/9887/daily-barometer-sports/where-are-they-now-tarver-brothers/

Where are they now: Tarver Brothers 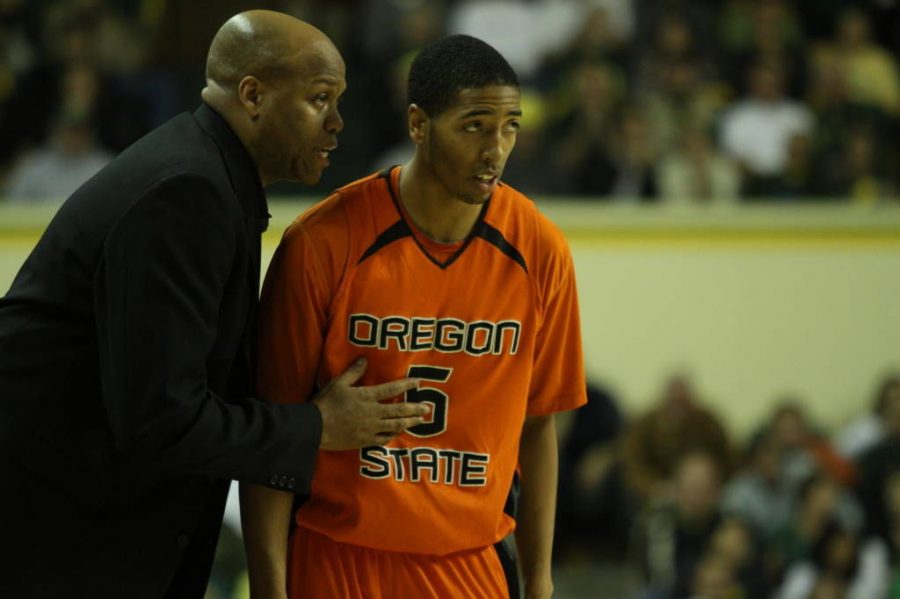 At OSU: After redshirting his first year at OSU due to injury, Josh had a standout year as a freshman. The 6-foot-3, 190-pounder started all 32 games, averaging the highest mark of all Pac-10 freshmen with 9.2 points and 1.3 steals in 33.2 minutes per game. His next three seasons were not as smooth, mainly due to his shuffling in and out of the starting lineup multiple times. He never posted the same statistics as his freshman year, averaging just 3.0 points per game his senior season. But, Tarver became one of the most consistent faces of the program by playing in 130 games over his five seasons with the Beavers.

After OSU: Tarver’s difficulties at Oregon State, especially his fluctuating playing time that occasionally changed without explanation, were tough to handle at the time. But based on how he had to face similar troubles after college, he now sees the benefit of experiencing those bumps in the road earlier.

”It taught me how to compete outside of college, because I wanted to keep playing,” Josh said.

He started his professional career by heading to Rwanda, which was “a weird experience, but a start,” he says. Then, he played in China’s National Basketball League and then back to the USA and the NBA’s Developmental League. After that he shipped off for Thailand, broke his foot in 2012 and decided to forgo a contract in Iceland by retiring. His professional career was a whirlwind: four different countries, 2.5 years and one sudden ending. Part of what helped Josh cope with his basketball career coming to a close was the memories of similarly losing playing time in Corvallis.

“It’s definitely difficult when one game you’re playing 30 minutes, and then next game you don’t even get in,” Josh said of his time at OSU. “I had never been in something like that, but it’s something that helped me in the 2.5 years I had [in professional basketball], fighting and never giving up. Those things helped me out in my career now and my playing career.”

Josh had already broken his foot while at OSU but fractured it even worse in Thailand. He developed knee problems as a result of spending too much time staying off his injured foot, and those problems ultimately led him to retire. His career opportunities back home, however, helped the transition. He now works as an Executive Team Leader at Target while he’s simultaneously getting his MBA in Global Management from Concordia University. Josh has also been married for about two years and his first child is due in August.

“It was a long basketball journey, but it definitely helped me for after basketball,” Josh said. “No regrets about quitting early, I had better things here. I’ve been enjoying life and living basketball through my brother.”

Josh has been “inspired” by the business world for some time and majored in Business Administration at OSU. He has plans to move up the corporate ladder at Target unless there are “other ideas that might spark me,” he said. He still gets his basketball fix regularly by helping coach the Sunset High School girl’s Varsity basketball team in Portland. His job at Target, though, is completely unrelated to basketball, and he’s okay with that.

“I know that sports is not the only part of me, and I wanted to do something completely different,” Josh said.

He and his wife Rachel both work in Portland, not far from where Josh grew up with his brother Seth and went to Jesuit High School. Josh and Rachel are excited about welcoming their first child in about three months.

“This is definitely an awesome stage in my life,” Josh said. “We’ve accomplished a lot of things together. Got a house together, got great jobs. The next phase is starting a family, which is definitely something I’ve dreamed of. It’s great to see that going forward.”

Not the least of all of Josh’s endeavors is keeping up with Seth. They played for four years together at OSU, graduating in 2010. Josh may have ended his basketball career a few years ago, but he’s happy to see Seth still living his dream overseas.

At OSU: Seth was just one grade behind his brother Josh growing up, but they both graduated the same year from OSU because Josh redshirted as as freshman. Seth was a defensive force for the Beavers, finding his niche at the top of OSU’s 1-3-1 zone. He was named the Pac-10 Defensive Player of the Year in 2010 while recording a conference-leading 2.2 steals per game; Tarver became the first Beaver to lead the Pac-10 in steals since Gary Payton in 1990. He chipped in 10.2 points and 4.6 rebounds per game as a senior.

After OSU: Seth’s professional journey has pushed his boundaries plenty; he followed graduation from OSU by joining the Portland Trail Blazers in training camp, spent three years in the NBA’s Developmental League, two months in Germany and he’s been playing in Japan ever since. The 6-foot-5, 210-pounder is on this third team in Japan, currently playing for a team just outside Tokyo.

“It’s a journey, you just keep learning,” Seth said. “As you learn, you get better as a player.”

Seth has learned that basketball overseas is very “cutthroat,” since most contracts are only one year long and teams aren’t afraid to cut players without warning.

“This life can have higher highs and lower lows,” he said. “If I was living in the U.S., life would be more consistent.”

Once Seth retired, he plans on getting into real estate. In fact, he studied for his real estate license while playing overseas, took the test during the offseason and passed. He has considered starting his real estate career even before he finishes playing overseas. Seth has an internship lined up this summer back in California with Intersect Capital, and the 27-year-old is looking forward to being back in the routine of working “normal hours.”

Seth also would like to start a family at some point. Though he isn’t married yet, he has already seen one marriage model what he’s looking for: his brother’s.

“He has a good relationship with his wife,” Seth said about Josh. “When I get married, that’s what I want, of course. They’re doing really good. They both have great jobs and have a great relationship, really. I just want a relationship like that.”

Josh is expecting his first child in August, but Seth’s new nephew will be far from his first. He already has 12 nieces and nephews via his five siblings and he’s been an uncle since age five; he and Josh are the youngest of the six Tarver children.

Seth also learned a lot from Josh’s professional basketball career, even though Josh’s proved to be much more short-lived due to injury.

“I saw him struggle, but then regain his balance and persevere through those tough situations,” Seth said. “It’s hard to put it into words, but I saw him really grow as a man. He could have kept playing, but it made more sense for him to stay home and start working. That was big for him because we always played [basketball], so when I saw him do all that, it showed me he was mature. He was willing to put basketball aside to start his family, start his life in the States.”

Seth and Josh still see each other in the offseason when Seth is back in America, and they keep in touch during the season despite the time and geographical difference. After all, they played basketball together since kids and continued that bond by playing at OSU.

“We’ve spent so much time together over the years,” Seth said. “We’re still tight.”

“I definitely look after my brother all the time,” Josh added.