The Daily Barometer • May 12, 2016 • https://dailybaro.orangemedianetwork.com/9967/daily-barometer-news/osu-spring-play-opens-tonight/ 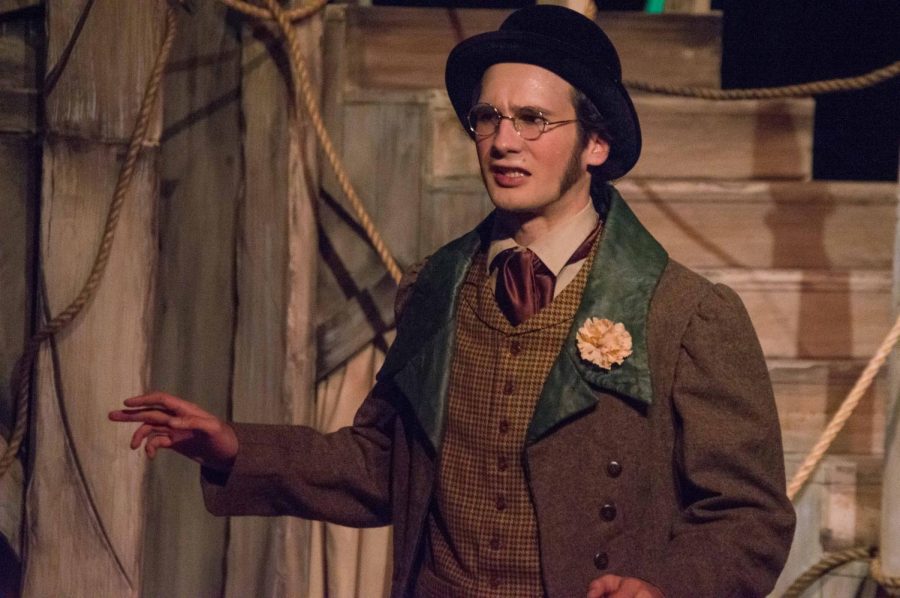 Rosencrantz and Guildenstein are Dead

The show’s production nights continue tomorrow and Saturday, and pick back up May 20-22. Although not written by Shakespeare himself, “Rosencrantz and Guildenstern are Dead” allows the audience to see into the lives of “Hamlet’s” minor characters, according to Director Elizabeth Helman.

“‘Rosencrantz and Guildenstern Are Dead’ turns the play ‘Hamlet’ inside out, and shows us the world from the perspective of these two minor characters that essentially just disappear in ‘Hamlet’,” Helman said.

This reinvention of the characters of Rosencrantz and Guildenstern might draw the attention of those who may not find the original Shakespeare very interesting, according to freshman and English major Hannah Jarden.

“It takes two characters from the original play that you presume to know pretty much everything about, and portrays them in a whole new way,” Jarden said. “It takes Shakespeare’s original work, which could be boring for some people, and brings it into the 21st century.”

The hidden lives of Rosencrantz and Guildenstern will relate to audience members on a deep level, according to Helman.

“It becomes an analogy for people—we are all in our own lives waiting for something to happen, and are all inactive spectators sometimes in our own existence,” Helman said

“Rosencrantz and Guildenstern Are Dead” is the 30th show Helman has directed. Auditions for the comedy were held late winter term, and the cast began rehearsing spring term. The cast has been rehearsing an average of 20 hours a week. Although the play is time-consuming, it is very rewarding, according to Helman.

“It takes time—this isn’t something you throw together,” Helman said. “It takes all your love, it has to. This has to be the thing you care about most at this moment.”

Although Stoppard is known for his dense language, “Rosencrantz and Guildenstern are Dead” will resonate with college students, according to Reed Morris, who will be playing the character of Guildenstern.

“So much of it can be related so closely to student life,” Morris said. “At this point in student’s life, we are constantly told what to do. There comes a time when, as a student, you may question that and want to seek out the answers for yourself.”

The surreal dialogue and set allow the audience to get more out of the show every time they see it, according to Helman.

“It’s such a rabbit hole,” Helman said. “You could watch it a thousand times and still get new things from the text and the interactions from the characters.”

The interactions between the characters mirror the audience’s struggles, according to Morris.

“This play represents something, at least for me, that is relatable on a very fundamental level,” Morris said. “It asks the questions about our own existence and the search for what gives us meaning to our lives. “

OSU students are not the only cast and crew members involved. The show also includes OSU professors and community members, which adds a different angle to the production, according to Helman.

“It creates a really interesting dynamic because the students are constantly getting different perspectives and different levels of experience,” Helman said.

“Rosencrantz and Guildenstern are Dead” is the third Shakespeare-related play presented by OSU Theatre this year. OSU Theatre annually produces three mainstage shows and two lab shows, as well as Bard in the Quad, an outdoor showing of Shakespeare plays during the summer.

Although several theatre majors and minors are involved in the shows, auditions are open to everyone on campus.

“We have quite a few students that are not majors and minors, they are computer science, engineering or business, and they just love doing theater and become very dedicated active members of our little community here,” Helman said.

OSU community members are encouraged to attend the show not only in order to experience Stoppard’s comedic production, but also to support OSU Theatre, according to Morris.

“The show is far more a comedy than many might think. Come and see the show, laugh and maybe even shed a tear or two,” Morris said. “Everyone has put in a tremendous amount of work into this show and I think it had become something quite wonderful.”

Tickets are $5 for students, $8 for youth, $10 for seniors and $12 for general admission. Tickets are available online, or at Withycombe Hall 143, the OSU Box Office.